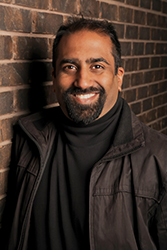 Dr. Amar Khoday joined the faculty at Robson Hall in 2012 as an assistant professor. In 2017, he was promoted to associate professor with tenure.

Dr. Khoday is the author of over 15 published writings, including articles and book chapters. In addition, he has written over 100 blog posts.

Since his arrival at Robson Hall, Dr. Khoday has taught one of the three sections of Criminal Law & Procedure, a mandatory first-year course. During his time at the law school, he has also created two seminar courses which he enjoys teaching immensely: Law and Resistance, and International Criminal Justice. In addition, he teaches the Refugee Law and Immigration & Citizenship Law seminar courses. Dr. Khoday has also delivered guest lectures in other Robson Hall courses such as: Legal Systems; Canadian Legal History; Theory and Practice of Human Rights: Critical Perspectives; and Selected Topics in Human Rights Research and Methods. He has also given guest lectures at the University of Winnipeg.

Dr. Khoday earned his Doctor of Civil Law (2014) and Master of Laws (2008) degrees from McGill University’s Faculty of Law in Montreal and Juris Doctor (2004) from the New England School of Law in Boston. Working under the supervision of Dr. Frédéric Mégret, Dr. Khoday completed his doctoral thesis entitled “Legitimizing Resistance? International Refugee Law and the Protection of Individuals Resisting Oppression.” With respect to his doctoral studies, he was a recipient of both the Social Sciences and Humanities Research Council of Canada Doctoral Research Fellowship and the O’Brien Fellowship for Human Rights and Legal Pluralism. In 2011, he was awarded a Doctoral Teaching Fellowship by the McGill Faculty of Law and taught criminal law during the summer session with Professor Angela Campbell. During his doctoral studies, Dr. Khoday also worked as a human rights researcher at McGill University’s Social Equity and Diversity Education Office. Prior to joining the faculty at Robson Hall in 2012, he completed a term as Executive Director of the McGill International Criminal Justice Clinic.

Prior to obtaining his law degrees, Dr. Khoday maintained a passionate interest in the study of history with a focus on South Asia. He earned a Bachelor of Arts degree with a double major in History and Southern Asian Studies, followed by a Master of Arts degree in History, both at Concordia University.