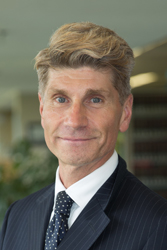 Dr. Jonathan Black-Branch was appointed Dean of Law in July 2016. Dr. Black-Branch has worked in a variety of countries including the United Kingdom, Denmark and Switzerland. He has held academic leadership roles including most recently, Chair in International Law and Associate Dean (Academic) in the Faculty of Management, Economics and Law at Royal Holloway, University of London; and had been Head of the School of Law and Director of Research and Enterprise in the Faculty of Business at the University of Bedfordshire; Dean and Head of School, ATV Business in Copenhagen, Denmark as well as Senior Law Fellow and Director of Law at Grey Friars Hall at the University of Oxford.