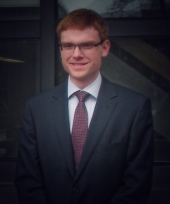 Born and raised in Winnipeg, Professor Brandon Trask worked for the Government of Manitoba as a research and policy analyst in the Office of Canada-US and International Relations while he was an undergraduate student in the University of Manitoba’s Global Political Economy Program. After two years of undergraduate studies, Professor Trask was admitted to Robson Hall in 2009. He graduated with his Juris Doctor (JD) in 2012, after gaining litigation experience through his time as a volunteer with the University Law Centre and through his work as a summer student with Thompson Dorfman Sweatman LLP.

Professor Trask has extensive experience teaching via distance through Memorial University of Newfoundland’s Law and Society Program, having taught over 1,100 undergraduate students since January 2015.

Additionally, Professor Trask was formerly a biweekly newspaper columnist with the Canstar Community Newspapers of Winnipeg and has made numerous guest appearances on CBC Radio One.

Professor Trask has an extensive history of community involvement, including: