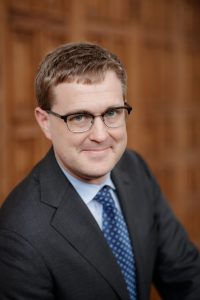 Joining Robson Hall in January 2020, Gerard Kennedy researches how different actors and institutions within or adjacent to the legal profession uphold the rule of law and facilitate access to justice. He principally does this through analyzing civil justice and procedure and administrative law and procedure, frequently with a comparative lens. His scholarship has been published in the Manitoba Law Journal, the Osgoode Hall Law Journal, the Supreme Court Law Review, Australian National University’s Federal Law Review, and the Windsor Yearbook of Access to Justice, among elsewhere.

Professor Kennedy received his Juris Doctor at Queen’s University, where he was the sole recipient of the Dean’s Key in his graduating class. He then clerked at the Ontario Superior Court of Justice before earning a Masters of Law at Harvard Law School as a Frank Knox Memorial Fellow. His doctoral studies at Osgoode Hall Law School have been supported by a Pierre Elliott Trudeau Foundation Scholarship and a SSHRC Joseph-Armand Bombardier CGS Doctoral Scholarship. As a doctoral student, he has held scholarship-supported visiting positions at NYU School of Law and the Max Planck Institute Luxembourg for Procedural Law.

Professor Kennedy’s interests in civil and administrative justice were largely inspired by his four years as a litigator at Osler, Hoskin & Harcourt LLP. He remains an active member of the legal profession, as a member of the bar and a regular volunteer at pro bono clinics. His commitment to pro bono work during and after his time at Osler was recognized by the 2016 Young Advocates’ Society Commitment to Pro Bono Award. A believer in connections between the academy, the bar, and the public, Professor Kennedy has published numerous articles in journals and blogs aimed at practitioners, in addition to pieces in the National Post, Policy Options, and The Walrus.

An educator at heart, Professor Kennedy had extensive teaching experience prior to joining Robson Hall while a full-time doctoral student and/or a full-time practicing lawyer. He has taught or co-taught twelve different courses between Queen’s University’s Faculty of Law and the University of Toronto’s Department of Political Science. In addition, he has served a coach for moot teams at both U of T and Queen’s.