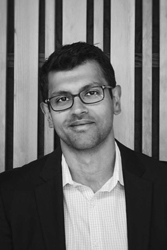 Professor Maharaj is uncomfortable writing about himself in the third person, nonetheless, he joined the Faculty of Law at the University of Manitoba as an Assistant Professor in January, 2018 and teaches in the areas of contract law and trusts.  While originally from Auckland, New Zealand, where he obtained bachelor’s degrees in law and commerce before obtaining admission to the bar in 2008, Professor Maharaj has since then established an academic and professional presence in Western Canada through the pursuit of graduate work at the Allard School of Law at UBC, and practice as a civil litigator.  He is admitted to the provincial bars of Alberta and British Columbia.

Professor Maharaj’s research interests include contractual obligations of good faith, damages and civil remedies, and equitable obligations.  His present research projects include the adaptation of his completed doctoral work into a monograph explaining the proper application of the mitigation doctrine to loss arising in breach of contract cases, and separate articles on the formulation of minimum criteria for the application of a general doctrine of good faith in the common law of contracts.